In my travels I tend to notice local signs that may be different than what I am used to. Our minds are trained to make comparisons and notice differences, or maybe I just grew up with that song by the Five Man Electrical Band?  When traveling to countries with a different language, we're limited to pictorial sings and icons or literal translations. But when traveling to countries with a common language, we can really see deeper into the culture and nuance behind the wording of the signs.  Take a brief journey to England with me via their signs. 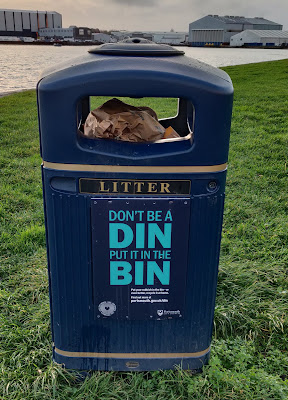 On our walks around Portsmouth, we often see this sign on the trash cans. It's a nice rhyme, but what does it really mean?  After doing some browsing of the Urban Dictionary, I found that "Din" is short for "Dinlo", which is a slang term that originated in the Portsmouth area for "someone who is thick or stupid..." Now with that in mind, it seems rather offensive to put on a public sign.  Another more common usage of "din" according to the Cambridge English Dictionary is: "a loud, unpleasant confused noise that lasts for a long time". In American English we might say "ruckus", however I doubt this is what they had in mind. 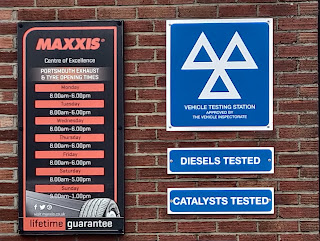 Common symbols can also be used in misleading ways.  We often see this big blue sign with the three triangles on brick buildings such as this. But, it does NOT mean there is a fall-out shelter located within as some of us who grew-up in the 50s or 60s might suspect.  Actually the triple triangle symbol is inverted when used as the international symbol for radio active fallout. If you read closely, the text below the symbol says it is an approved vehicle testing station - not that the cars are nuclear powered or anything - ha! 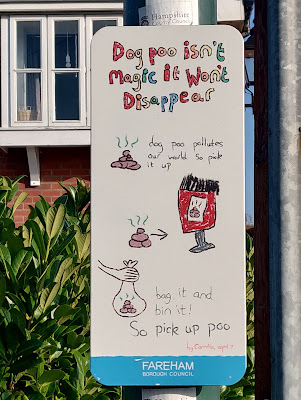 Now, it also seems that signs are very regional and that every community has their own designs or style. In Fareham many of the sign designs look like the design was awarded to a primary school student. 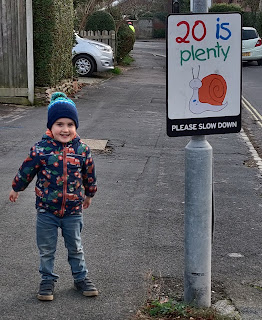 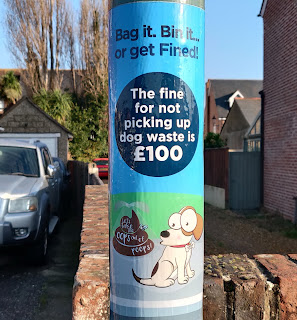 "Let's Take the Oops out of Poops" 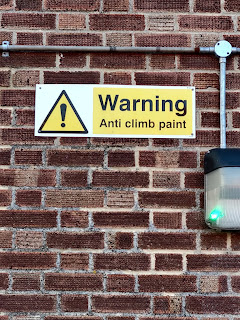 Anti-Climb Paint?
Now there are also some rather unusual signs on walls of both public and private property too. The example above seems a bit unbelievable - where's the paint?  What is anti-climb paint exactly, Teflon? 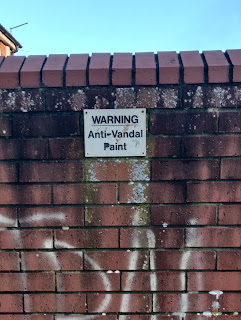 Anti-Vandal Paint?
Along those same lines, we see an example of anti-vandal paint above.  Are the vandals using this paint? Because it doesn't seem to be stopping them. 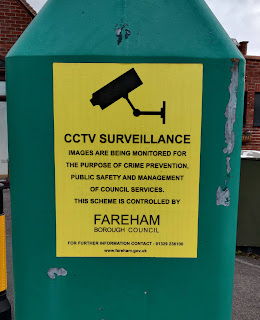 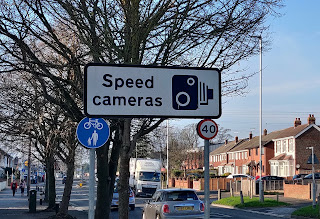 Speed Cameras
Speaking of cameras, these signs seem to be everywhere too.  As one who can spot a speed camera at 50 meters, I think there are a lot more signs than actual cameras in use. Does anyone know what the other two signs are? 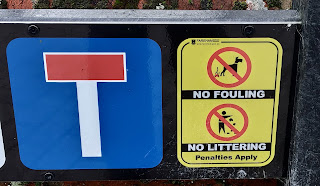 Dead-end,  No Fouling & No Littering.
Next we move along to public highway or roadway signs. There are plenty of new symbols and signs to get used to.  One that had me puzzled for a while was the "T" sign above. This is the symbol for a dead-end street or a street with no outlet.  This symbol is often used as part of the street name signs.  The other two signs seem obvious.  So does the "No Fouling" sign mean that your dog must hold-it on this street, or that the owner must clean up after them?  It seems confusing in context of the other signs above. 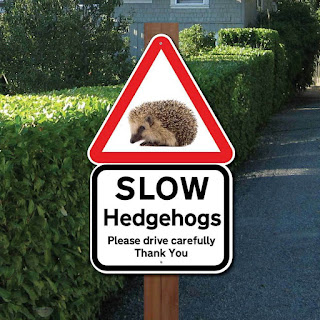 SLOW: Hedgehogs!
Speaking of regional road signs, many areas have their own unique wildlife that needs protection on the roads. We saw numerous signs warning of hedgehog crossing when we visited Hayling Island. Of course hedgehogs are slow, they're not rabbits! 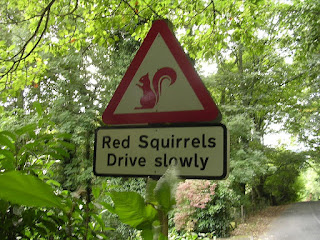 Red Squirrels sign
Over on the Isle of Wight, we saw a different variety of wildlife signs. Apparently over on that island, they have a thing for red-haired squirrels, not hedgehogs. 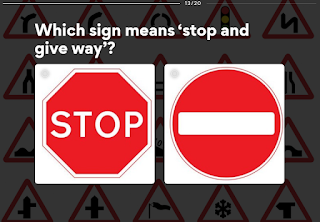 Test question from driving test
Now there's one sign I have never seen in England (so far). The very familiar octagonal, red stop sign.  They apparently don't use them over here. They are so rare, that one of the driving test questions reminds drivers that they are still a thing. 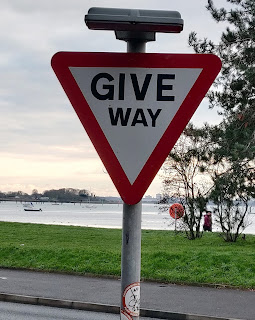 Give Way
Since there are virtually no stop signs, what controls the intersections? Of course it is the rolling-stop signs, aka "Yield" or "Give Way".  The symbol and shape should be familiar to American drivers, the words may not be. No they are not asking for donations to the United Way. These signs are plentiful, but it's not clear to me when they get used and when they are assumed. More often than not, an intersection will have no stop or give-way sign and no traffic lights, this includes T-intersections and 4-way intersections with a side street meeting a main thoroughfare. If pavement markings or other clues imply which traffic is to yield, why are these signs even necessary?
I'll leave you with this link if you'd like to hear the original song by the Five Man Electrical Band:
-David