Time again for British baking with Becky. Today I will show you my attempt to make Goosnargh Cakes. This recipe originates from the village of Goosnargh, in Lancashire, which happens to be the first area I visited over 30 years ago. It is a particularly beautiful area in England and hopefully after the world opens again, I can return for a visit and see several friends still living up North. 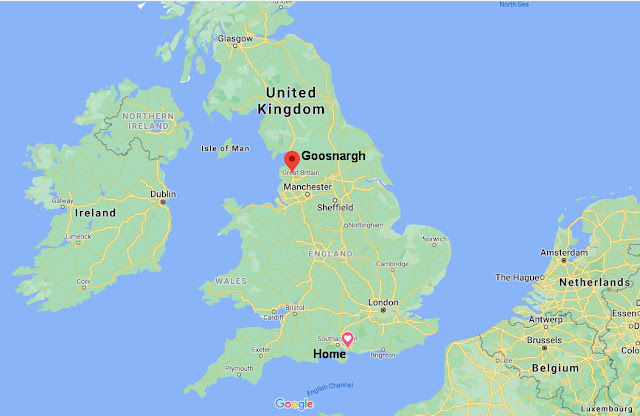 So, on a side note, I should take this time to explain that any baking attempted right now is difficult. We are currently in the middle of a kitchen remodel, that I am sure will be its own blog. When we made this recipe, I knew that in just days I would be having the oven pulled out and not replaced for several weeks. The kitchen is also in a state of flux with dishes, pans and utensils being constantly moved around as a cabinet is removed and another installed. I am not saying this to complain because I am excited about the remodel, but as a reminder that my love of baking will overcome a few inconveniences.

As a reminder, this recipe is from "Paul Hollywood's British Baking", cookbook. I will once again be relying on him as my mentor.  I would classify the Goosnargh Cakes as a biscuit or cookie in the fact that they are round and flat. 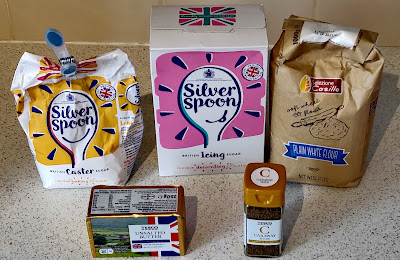 As you can see from the picture, the ingredients are relatively simple with the addition of caraway seeds to add a unique flavor to the cakes. It is also worth noting that there are no eggs or salt in the recipe. This is still mind boggling to me since I consider salt to be the one ingredient that must be in every recipe. Because of this, I have spent time reconsidering my butter choice. In the U.S. I have always used unsalted butter. I have been taught that the best cream is used in unsalted butter since impurities cannot be hidden behind salt but here I have greater faith in their butter. So after this butter is used up, I plan to switch to salted butter.
So these cakes are basically flour, sugar and butter. Sounds simple enough! They are basically a shortbread with the butter being incorporated with my fingers instead of being creamed into the sugar with a blender. This might be because there is only 1 Tablespoon of sugar in the dough. Don't worry, these are a sweet cookie because the rest of the sugar is sprinkled on the top before baking and again after they are taken out of the oven. 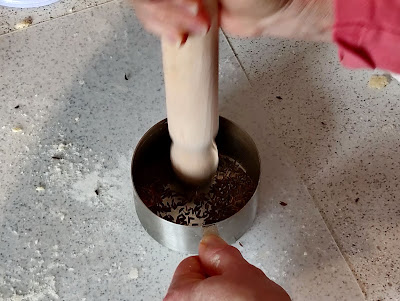 The only struggle we had was the caraway. Paul suggests, "Add a little at first, grinding the seeds with a pestle and mortar to give it a more subtle flavour". (See the last word, "flavour", my computer just tried to auto-correct it to "flavor," but that is how it is printed in the book). Anyway, we don't own a mortar and pestle. I guess that is not true, I own two but they are in Washington so we tried various methods to try and get the right consistency. I first tried my rolling pin in a measuring cup. David noticed me struggling and grabbed the hammer, which he had laying nearby for the kitchen remodel, and gave it an attempt. Both had the same effect so I went with the the rolling pin method. It felt more appropriate for baking. 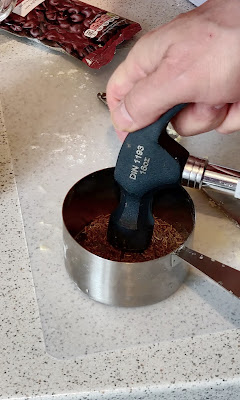 The recipe calls for lots of butter so the dough came together easily. After a quick chill in the fridge, I rolled, cut and baked them. While still warm, the last addition of powdered sugar is sprinkled on top. How do they taste? Delicious! I loved the caraway giving a subtle flavor. I ate a couple while warm but I also enjoyed them after they had cooled with a cup of tea. That sounds pretty British doesn't it. 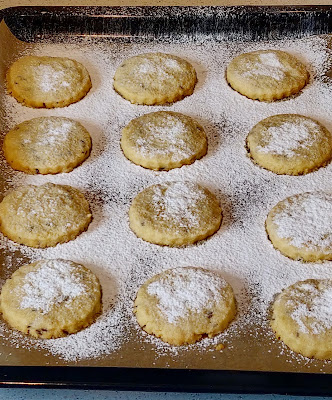