This is the rest of the story on the kitchen. This is the area that was so in need a of an upgrade. There were so many problems with the space originally, we struggled with how to start over. Let's review the status of this kitchen when we moved in.

First the obvious code violation; directly above the cooktop or "hob" as they call it here there is a full size upper cabinet - no vent, no hood.  So anytime you cook a pot of spaghetti (or anything moist) the bottom surface of the cabinet collects all the steam until it literally rains back down on the stove. If you ever have a chance to design a kitchen don't do this!  Apparently they are quite lax about inspections over here.  Yes before you ask, we did get full approval from our town council to renovate the kitchen.

Next, the wasted space and total lack of any usable work surfaces.  Notice how the corner space is wasted and blocked by the cabinet with the double-oven.  Even the upper corner on that side had no cabinet, just a make-shift shelf and the narrow gap in the dead corner.  You can't really tell from this angle, but the cooker is off-center and probably too-close to the left side. Also notice that the sink is a single bowl with no drain-pan and the dishes are simply drying on a towel directly on the counter-top. Of course when we dismantled the cabinets, we noticed that this corner had an obvious moisture problem that we had to fix.  See the details in the "Before Picture" below. 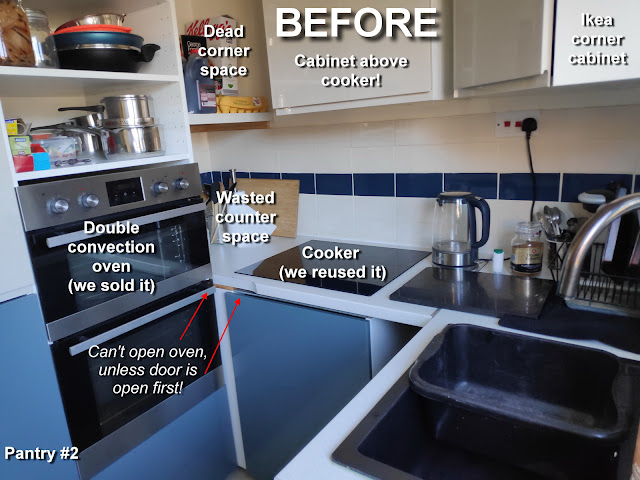 Another big obstacle we faced was the floor. When we removed each of the three pantries (larders), we found that the floor tile was missing below the cabinets!  We had to do something to fix these gaps because we weren't putting anything in their place. At first we thought we would just rip everything out and replace the entire floor. The tile was throughout three of the four rooms in the house, so it was going to be a big, messy job ripping everything out. Since we were also living in this flat while remodeling, we became dissuaded from this path.

Another option we considered was putting in floating laminate click-lock planks directly over the existing tile floor.  It can be done, but making sure everything is perfectly level first can be a challenge. If there are any bumps, the planks can chip and break their tabs, creating a mess. These planks add another 1/4 inch to the floor, which also means that all the baseboard trim must be redone and possibly some of the interior doors may need trimming.  If instead you use a thinner, flexible vinyl, the bumps and seams will show through.
So after much deliberation, we kept coming back to the need to just patch holes with matching tile. How hard could it be?  We found a couple of tile contractors who were willing to do it for a reasonable fee, but none of them had any tile that matched. We spent about a month trying to locate some matching tile and ended up finding some about 2 hours away. We made the four-hour round-trip drive nearly to Wales during the lock-down to retrieve the two boxes of matching tiles. It was just enough!  The tile installation turned out to be the only work we hired out to a local contractor. I just didn't want to deal with that part of the job. He came in and was done in a few hours, so we could move on.
The existing kitchen was obviously an Ikea kitchen. I had previous experience doing a full Ikea kitchen back at the blue house in Washington, so that seemed like the natural place to start.  I was already familiar with their 3D design tools and the core technology (Google Sketchup), so that is where we started. We quickly ran into some problems with the space. Ikea cabinets only come in a few fixed sizes and they have only one option for corner cabinets. They also aren't designed with any off-set from the wall to allow for plumbing behind the cabinets.  Finally their upper cabinets are only avialable in either the standard 70cm or the the extra tall 100cm height, which we didn't have room for. Finally during the lockdown Ikea stores were closed and with the recent implementation of Brexit, many of the Ikea parts and components were delayed as much as six months!
We found a local big-box DIY shop here similar to Home Depot called B&Q that did these flat-pack kitchen cabinets.  They manufacture almost everything here in UK, so there wouldn't be any problems with bringing stuff over on the trucks.  B&Q also seemed like they were more adept at fitting kitchens into the English style of small flats. They offered many more variations of cabinet sizes and had offsets for the necessary plumbing that runs on the walls behind the cabinets. While they were more expensive than Ikea, we decided to go with the B&Q "Goodhome" brand for everything in the kitchen.
The main kitchen arrived in two separate shipments. The first shipment was just the uppers and included 38 separate boxes that we had to stack-up in our lounge while we worked to install them. The second shipment for the lowers came about 3 weeks later and included 54 boxes!  It was quite a mess in the house wile we were installing. As we progressed, I kept discovering that there was just one more special tool I needed and had to make many additional trips back to the hardware store for these tools and extra items. Isn't that the way it always goes?  The hard part for me was, knowing that if I had been doing this project back in the states, I already had all the tools I needed. It was hard for me to buy a tool just for one job, knowing I can't bring it back and will probably never use it again.
After much hard work it all finally came together. We decided to skip the vent-hood (not required here for electric cooktops, if there is an opening window nearby). But did leave the space open for the air to circulate above the stove. We used that space as an accent wall to match the color band of the existing back-splash (that we kept).  We also reused the existing cooktop which was in good shape. Becky was so sad to give up the double oven, but we replaced it with a very nice single multi-function convection oven, which we centered in the wall. We replaced the sink with a new composite (like quartz) black sink with an integrated drain pan.  The biggest change was in freeing up the extra counter space. The worktop space flows seamlessly into the breakfast bar so that can double as workspace when needed. 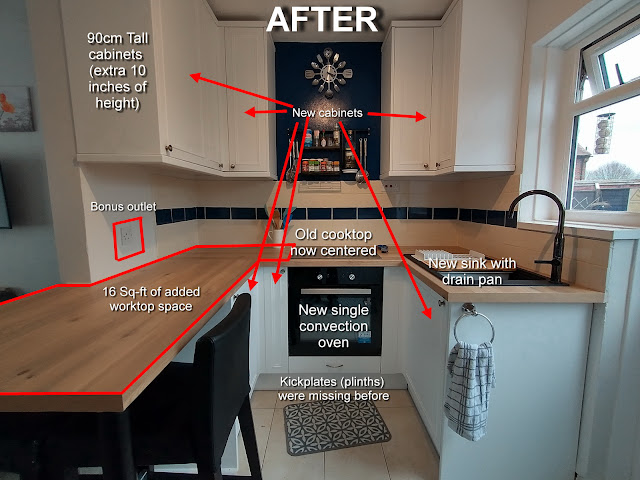 We discovered a hidden power outlet after removing the double oven, which was a big bonus since we had decided not to upgrade the electrical for budget reasons. We installed new kickplates (plinths) which had been missing from the original kitchen and due to the clever size options of B&Q, we gained a few extra cabinets, making better use of the space with no dead-zones. The kitchen is so much brighter and more usable now and all the teal is gone!