If you've never taken a food tour, it's a great way to see a new city and get the inside scoop from a local on what to eat, what the locals eat and some of the history along the way. They are usually a walking tour with many small bites spread over several hours.  If you are ever in Budapest, perhaps as a stopover on a Danube river cruise, I highly recommend taking one.  In Budapest we took an organized food tour by Nora at http://www.foodtourbudapest.com/ She guided us through the town on a culinary adventure and gave us so much history along the way. Some of the food from these photos are from that tour, others are food we found along the way on our own.

On the food tour we learned that meats and breads were the primary foods of breakfast and supper, with a bigger meal served mid-day. We tried to follow this pattern.

More samples from the food tour. Below is the variety of salami sausages we tried at the Central Market,

We learned that when you hear "paprika", you can't assume it is that typical smokey-sweet dried and ground pepper  flavor that we're all used to. Sometimes the word is used to describe a pepper sauce (hot-sauce) that is stirred into the goulash soup or on other foods.

There are a few very nice pastry shops in Budapest. Our tour guide took us to one of the more famous shops called Hisztéria Cremeria. These are a few of the beautiful pastries on display. One of the girls behind the counter was so camera friendly she had to make sure she showed me the love.

Above is just a single page from a 20 page menu book for the Cafe Frei.  This place is the fastest growing coffee shop in Europe, which started in Budapest. There are so many varieties of regional coffee drinks, it makes Starbucks look old-school. They also sell their own chocolates and pastries too!

Another popular item in Budapest are the "Chimney Cakes". These are a type of pastry dough that is rolled onto a small cone shaped holder then roasted on a spit. Many vendors of these can be found on the streets or in local markets. Typically they are flavored with nuts or cinnamon, but some of the more touristy places have added fillings and toppings like ice cream or chocolate.

The apple pie slices below were a totally unexpected surprise. We stopped at the café inside the museum of fine art and I ordered a slice of something familiar. Now this is a cafeteria-style eatery inside the museum. They have a captive audience, so expectations were rather low. I've eaten a lot of apple pie in my days, but this was far and away the MOST delicious apple pie I've ever had!  I don't know if was the variety of apple used, or what ever else they added, but I was in heaven.

One place not on our formal tour, but we discovered ourselves is a small alleyway in the Jewish quarter, near the ruin bars that is filled with food trucks (below).

One of the trucks in this corridor was a place that served Langos Burgers. They offered many varieties including lamb and duck (about $8.00), but we opted for the traditional beef with sweet potato fries. 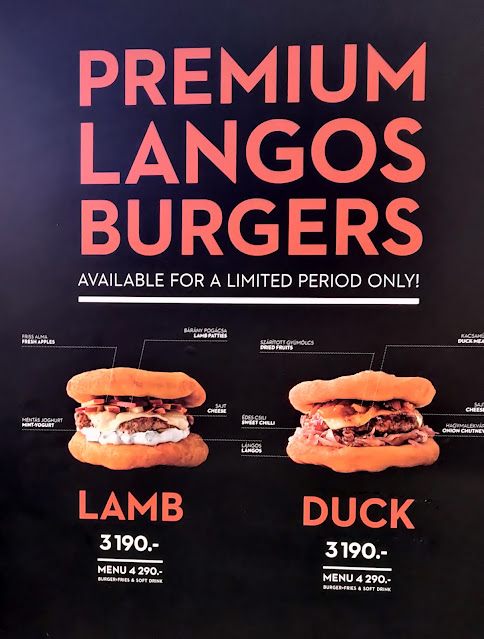 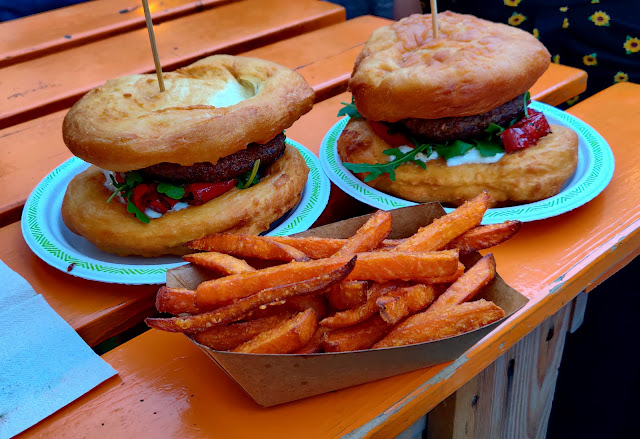 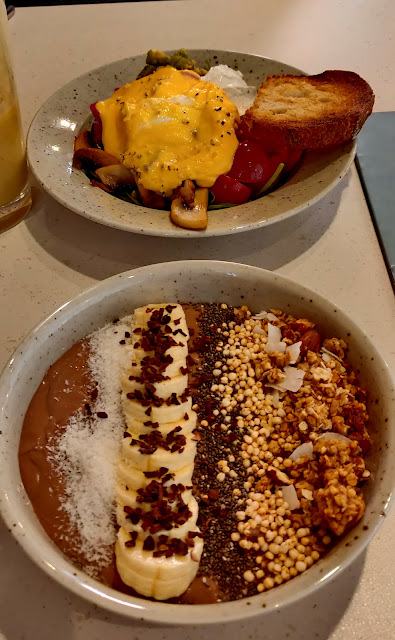 On our last day, we found a great Indian restaurant called Bombay.  As you can see the food was delicious and nicely presented.

Below are some of the hand-made chocolates from a tiny little chocolate shop.

The picture below shows some of the sweets from a vendor at the street market. These colorful "licorice" vines remind me of some of the street vendors you might see in Stockholm.

French baking has a strong following in Budapest. Below is a photo of some of the macarons available at a local street vendor. 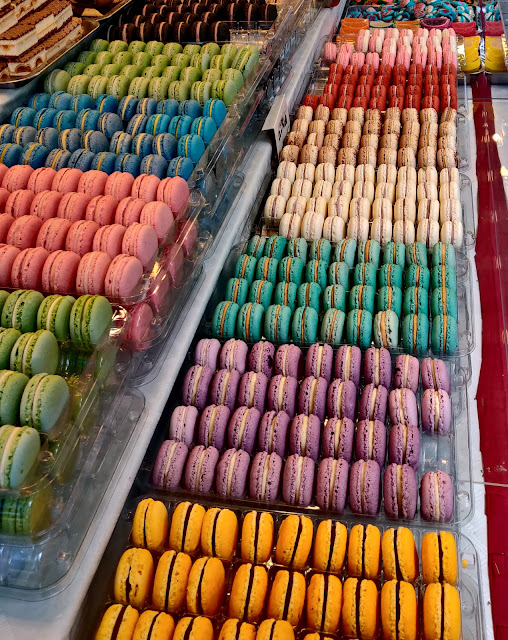 Reading labels at the grocery store is hard unless you read Hungarian.  The next photo is the label of some local cheese we found at the grocery - still not sure what it was but it did have dried tomatoes and basil (paradicsom & bazsalikom). 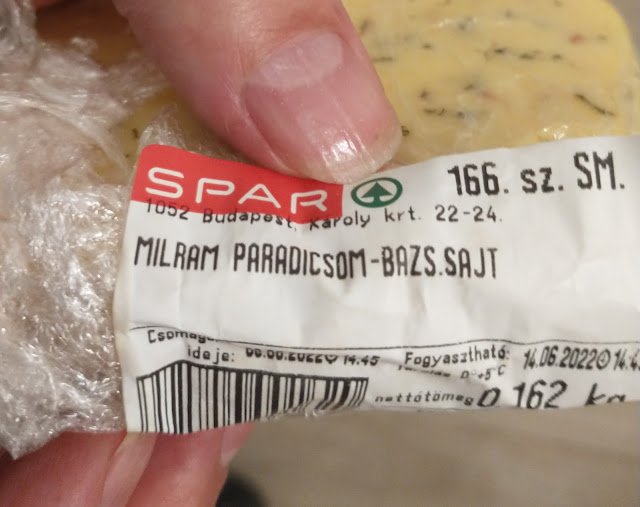 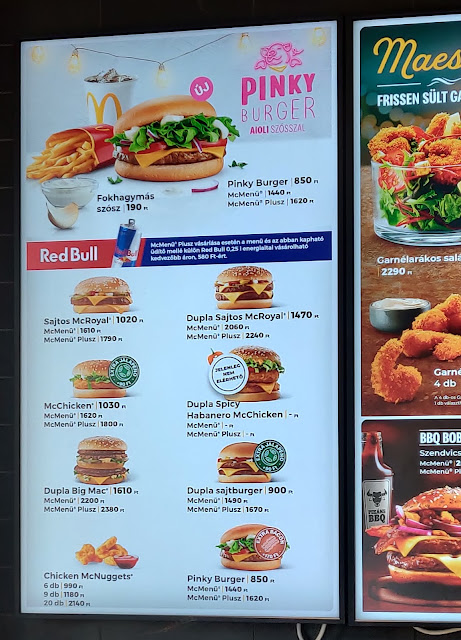 Finally the hairy red pig was a photo our tour guide showed us to describe the type of rare  pork we were having at one of the restaurants. This rare breed of pigs bred in Hungary has a very tasty meat and was made nearly extinct under Soviet occupation.

We spent seven days and seven nights in Budapest, Hungary in June, 2022. Food is always a big part of our travel experience in a new place. Foods can say so much about a place, it's culture and it's people. Smells and tastes also create lasting memories that can be linked to a particularly sweet memory or idyllic moment in time. One place we always try to visit when traveling is the town's central market place. We made a point to visit the Budapest Central Market Hall before our food tour to get familiar with the local gastronomy. The Budapest Central Market was built in 1897. These food markets provide a great overview of what kinds of food you'll find in the town, what their specialty foods are, and what grows fresh in the region.

Modern cooking has created a higher demand for fresh fruits and vegetables. A wide variety are available at the Central Market Hall.

Dried Paprika is a staple of Hungarian cooking. Many brands and varieties are available at the markets or grocery stores. It's a good idea to use Google Image Translate to help with reading the labels.

These dried pasta varieties are somewhat unique to Hungary since they are quite small and delicate and are frequently used in cooking goulash.

Excellent chocolate is available at the market. There seems to be a trend toward this variety with dried fruit on top.

Not so many cheese mongers are at the market. Cheese is not very traditional for Hungarian cuisine but is gaining popularity. 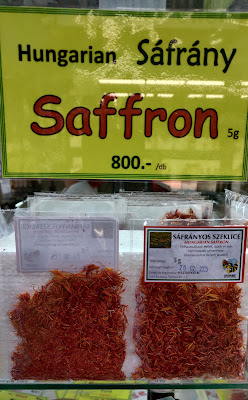 Beware that when you see "Hungarian Saffron" as it is not actually saffron from the crocus flower as you might get from the middle east or Spain.  It is made from the safflower plant and is used in traditional Hungarian cooking to impart color. It does not have much flavor and it takes substantially more of it to impart the color.

Foie Gras, Goose Liver and Duck Liver are very popular in Hungary. They are available fresh or canned.  Some other unusual meats can also be found at the market. Nothing goes to waste.

If you ever have the chance to visit Budapest, even as a stop-over on a river cruise, I would recommend a visit to the market. It's an easy walk from the Danube where the river boats dock. Upstairs you will find a wide variety of local trinkets and souvenirs. There are also a few restaurants on the upper floor. We tried one of them and it was delicious.
-David
at June 09, 2022 No comments: