We have been in England now for over 4 months and being self proclaimed "Foodies", we are feeling a bit sad that we are on the downward side of our trip and we have had little chance to explore and eat the local cuisine. It has also been particularly tough on me since my passion is baking and making people happy through food so we decided to do something about this, Bake! 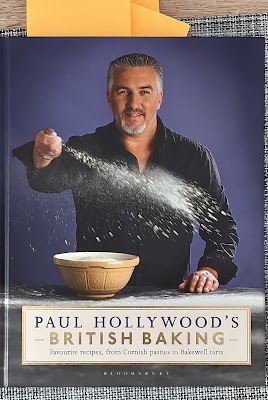 Step one, find a good mentor through a British cookbook. I decided on, "Paul Hollywood's British Baking." Paul Hollywood seemed like a good choice because he doesn't use fancy equipment for his recipes. This is really important because I have limited resources. Now I know those of you who know me well, know that I have almost every baking tool one could hope for. I have a couple of Kitchenaid Mixers, (going to give them a big hug when I get home to Washington), several sets of measuring cups, knives, cutters, scrapers, baking pans, well you get the idea. Anyway, here I have 400 square feet of living space and the biggest kitchen appliance I own is a hand mixer. This is an excellent opportunity to get back to my baking roots and bake like I was taught as a child.....be creative!

Step two, assemble ingredients. This sounds easy enough but they use different terms here than back home in the U.S.A. Is cornflour cornstarch or cornmeal? Which sugar is caster sugar? Is Fan 180 C. a real temperature? After several questions posed to our Echo, "Alexa" we set off to the store to get the final ingredients needed. One thing I have to say about Britain, the dairy products are amazing and fresh. I have been known to sample the butter before spreading on toast. If I could bring one thing, or several small things, back to Washington with me it would be a suitcase of butter.

Step three, choose a recipe and bake. I am starting with three recipes that resemble a cookie. By cookie I mean that they are round and somewhat flat.

The first one we baked is called Chocolate Heavies. This recipe is from the area we are currently living in, Southeast England. It was from the Victorian times and originally had currents instead of chocolate chips. (sounds like a good change by Paul). Notice by the picture, chocolate chips are sold in these small packets that to me look like a snack size and sorry Paul, I added the whole packet, which was 100 g instead of the 75 g in the recipe. This recipe also has lard as ingredient which I have not used in cookies. 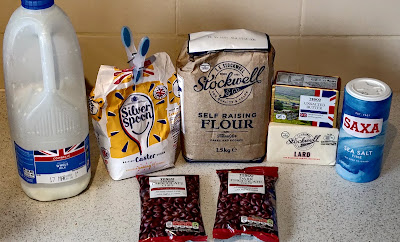 The recipe came together relatively easy. The only issue I had was the instruction that said to "use up to 40ml of milk". I used the whole amount and it still was very crumbly. I didn't want to stray from the recipe so I just carried on. Eventually the dough did come together and I was able to roll it out after the prescribed chill time. 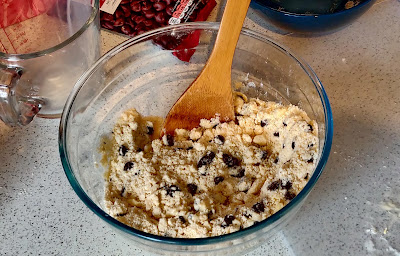 The Heavies, aka cookies, came out a beautiful golden brown thanks to the egg wash before baking. I was pleased at how they looked and I think that Paul would also, they might not be handshake worthy but certainly good enough. 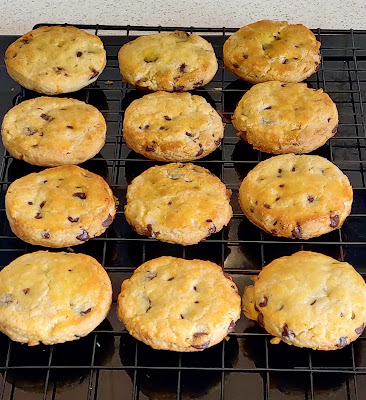 The last instruction in the book said, "These biscuits are best eaten fresh". I took this quite literally and ate two while they were still warm. All in all, I think they were great tasting. Pretty dry compared to what I am used to but they would be great with tea, or another hot drink.