We have had lots of friends and family reach out wondering how we are doing with the new variant strain of Covid. Thank you for all your concern so today I thought I would address this in the post.
When we first arrived the country was in lockdown. This didn't mean much to us since most of this time we spent in self quarantine for 14 days. When we were released we had about one week left of the national lockdown but again we felt mostly unaffected since we were staying at our son's house. Our few trips to stores during this time we noted that the stores were strictly controlling how many in at any one time.
Then on December 2nd the lockdown ended and our area in PortChester was under a tier 2. This meant that stores could relax some, restaurants could have dine in, on a limited basis, gyms and pubs were open but masks were worn everywhere inside. It is sad to say that this felt almost normal. It is also during this time we enjoyed some family day trips. Let me note here that we were trying to be careful since our son Kenny is set to deploy early January and even though the first 14 days of his deployment are going to be spent in quarantine, we didn't want to risk him getting sick.

Our first daytrip was to Stonehenge. What an amazing site! Sometimes I still have to stop and remind myself at how old so many structures around me are. Stonehenge is an English Heritage site. Except for the museum and shop, which were open at the time, it is outside. We had to buy a ticket ahead of time that specified the time we could enter. I am sure this is the procedure they use to keep the crowd to a small size.

The next daytrip was to Dover. At the time Dover was in tier 3. This meant restaurants could only do take away and all the inside space, such as museums, were closed but the outside grounds were open. Again, we had to buy a ticket in advance that stated the time we could enter. We enjoyed the day exploring the castle grounds and walking along the white cliffs. 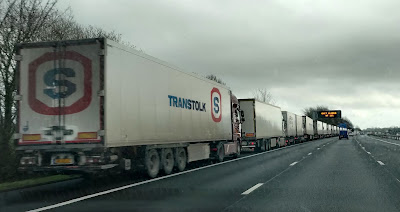 We did get to see history up close and personal with all of the big semi-trucks waiting in line for the ferry to France. They were stacked on the road for miles. By miles I mean 10 plus miles. They were trying to get their goods moved before Brexit went into effect. It was surreal. That is my word for this year, "surreal". So many moments from 2020 have been just that.

Our last daytrip was to the Isle of Wight. This was the trip we planned for the boys because we were taking a ferry, riding a Christmas train and seeing Santa,aka Father Christmas. The Isle of Wight was at tier 1 which is the most relaxed tier. People were still wearing masks and socially distancing. We once again had to buy tickets in advance that gave us a time to ride the train but also an appointment with Santa. For the train, our family was assigned to a private car, so there were no other passengers sharing our space. We also go to eat inside at a Farm-shop. Don't get too worried, the tables were still socially distanced. I am really happy we got to do some normal things before this next phase kicked in.

So if my memory is correct, a couple of days before Christmas, the new variant was announced and where we live was thrown into tier 4. Kenny and Kim were still in tier 2, which was totally bizarre since they are only 2 miles from our apartment and in the same county. The way they divided the area into tiers was not very logical and it actually divided a local grocery store into two tiers. The joke was most of the store was in tier 2 but the alcohol aisle was tier 4.
Since then, we have all been placed under tier 4. Again the big question, how does this really affect us? To be truthful, not much. We are part of a support bubble that includes Kenny and his family. Our life consists of walking back and forth to their house and an occasional trip to the store to gather supplies. I think that people are Covid weary. By this, I mean that we have all made so many adjustments in our day to day living that it is hard to get upset at all the news and changes. It just feels like life and I hate that. I hate the fact this is all feeling normal. I am hopeful on this New Years Eve that we can find another new normal that includes more hugs, handshakes, and meeting new people.
- Becky
at December 31, 2020 No comments: